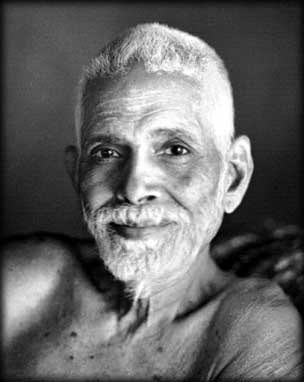 ” There is nothing new to get.
You have on the other hand,
to get rid of your ignorance,
which makes you think you are other than Bliss.
For whom is this ignorance?
It is to the ego.
Trace the source of the ego.
Then the ego is lost and Bliss remains over.
It is eternal You are That, here and now…
This is the master key for solving all doubts.
The doubts arise in the mind.
The mind is born of the ego.
The ego rises from the Self.
Search the source of the ego
and the Self is revealed.
That alone remains.
The universe is only expanded Self.
It is not different from the Self…

With 16 years Ramana Maharshihad a key experience: Without any particular reason he had fear of death, and in silence he tried follow the question what death really was, and what he himself really was. These were not just thoughts, but his first deep spiritual experiences.

Later he spent many years in an ascetic life, until he found what he was looking for: his own inner self. He spent his whole life at the foot of the famous mountain Arunachala in South India, where his Ashram was established.

As his life was simple so also his teachings are simple. God is not somewhere in Heaven, but an experience that can be made here and now by those who are sincerely searching for it. Who am I? is the question that has to be followed to the very end.