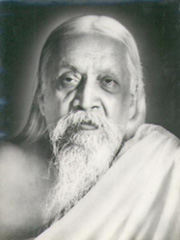 Sri Aurobindo was sent at the age of 7 to England for education. He eventually became a brilliant student at Cambridge. With 21 years he returned to India, where he first became a professor and later a fighter for India’s independence. He was the editor of the journal “Bande Mataram” and was put to jail twice because of his activities to free India.

In 1905 he began with Yoga, 1910 he retired from politics in order put all his energy into his spiritual task. 1926 he founded the Sri Aurobindo Ashram, whose responsibility was given totally to the Mother, Sri Aurobindo’s spiritual companion. Sri Aurobindo himself spend his last 24 years in total seclusion – he left his room not once during this time.

Sri Aurobindo’s main books are “The Life Divine”, a philosophical explanation of his Yoga, and Savitri, an epic he kept working on until 2 weeks before his death. The edition of his total works has 30 volumes.