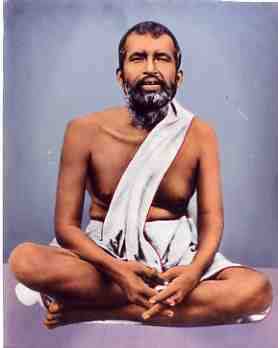 Sri Ramakrishna’s life is an example of ceaseless search of and devotion to the Divine. Even as a child he had high spiritual experiences; as a priest in a temple he spent hours and days in intensive meditation. All his thoughts turned around God, nothing else was interesting him. Even for his closest disciples, his childlike being was often difficult to understand, at the same time it was this total integrity that drew them towards him.

After he had realised the truth through the traditional Hindu path, he tried the Christian path and the Muslim path and saw that these path were leading him to the same goal.

During his lifetime, Sri Ramakrishna did not have many disciples but many were extremely dedicated to their spiritual life. After his passing many disciples renounced the world and took monastic vows. After his passing his wife Sarada Devibegan to initiate many seekers and became the respected head of the Ramakrishna Order. He did not write anything, but his words have been recorded by one of his disciples in the “Gospel of Sri Ramakrishna”. His most famous disciple is Swami Vivekananda.

(1) from Collected Sayings of Sri Ramakrishna