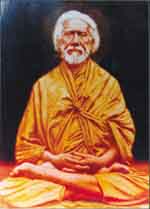 ” Ordinary love is selfish, darkly rooted in desires and satisfactions. Divine love is without condition, without boundary, without change. The flux of the human heart is gone forever at the transfixing touch of pure love “

Sri Yukteshwar started very late with spirituality. He came from a rich family, married young, invested his father’s properties and had a normal family life. Only after the death of his wife he became a monk and spent all his time studying the scriptures and meditation.

His master was Lahiri Mahasaya, who in turn was a disciple of Babaji. The most famous disciple of Sri Yukteshwar was Yogananda, who came to the West and became well-known through his book “Autobiography of a Yogi”.

There are only two books written by Sri Yukteshwar, at least another one was lost. He spent his later life teaching Kriya Yoga in two different Ashrams in India.